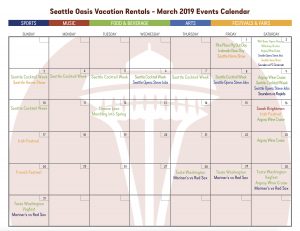 March in Seattle. You might think there’s not much going on due to all of our, ahem, liquid sunshine, but you would be wrong! Seattle is full of indoor spaces that have events all year long like the CenturyLink Events Center and WA State Convention Center to name a couple of the biggest ones.

There’s also plenty happening on the Theater & Arts front: the Pacific Northwest Ballet, Seattle Opera, and Seattle Symphony all have full calendars as well as the many theaters that our city boasts. Marie, Dancing Still is at The 5th Ave Theater from March 22nd – April 14th, the Paramount has Cats from the 26th – 31st, the Moore and Neptune have something almost every night and the ACT has the Shakespearian classic Romeo and Juliet for the entire month!

The Seattle Center has lectures, plays, movies at the Armory and a couple of fun festivals including French Fest on the 24th.

Sports finally get underway in March too. The Seattle Sounders FC kick off their 2019 Season on March 2nd hosting FC Cincinnati at 7pm. And the opening day for the Seattle Mariners is Thursday the 28th against the Boston Red Sox. Everyone who shows up gets a magnetic schedule!

If you’re into food and beverage events, March does not disappoint. The Pike Place Pig Out is on the 1st, Seattle Cocktail Week is the 3rd – 10th, Taste Washington is the 28th – 31st and Argosy starts up their every Saturday Wine Cruise event on the 2nd, and it runs through October.

Click on this link to view the entire 2019 Events Calendar and see what’s going on for your upcoming trip! Events12.com also had a great events calendar that shows fun things to do for the entire Puget Sound Region.

And trust me, you want to be close to all of the fun happenings in Seattle, especially during the St. Patrick’s Day weekend. Let Seattle Oasis Vacation Rentals help you find a luxury apartment in the heart of action. From Belltown to Capitol Hill, we have something that will fit your needs. And for those of you who want to get away from it all, we have several quieter units available too. Seattle Oasis Vacation Rentals, Redefining Accommodations since 2007.