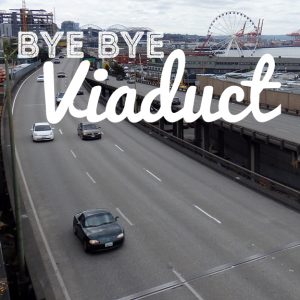 This January, Seattle is Undergoing an Epic Renovation!

Perhaps surprisingly, January is a great time to make a trip to the Emerald City.  Seattle has great eats and world-class museums. Crowds are small, and lines are short!  Weather, while rainy, is rarely freezing so getting around is easy.  Downtown Seattle has the flagship Nordstrom as well as many other great little stores as well as an upscale shopping mall. Even in January, the Pike Place Market is still vibrant and active, with lots of vendors active year-round.

With that said, on January 11 traffic and commuting in downtown Seattle is going to get a lot more challenging, at least temporarily. Why? Because the Alaskan Way Viaduct, that large freeway between the tall buildings of downtown and the Seattle waterfront will close forever!!!!

It’s being replaced by a brand-new tunnel that will run under downtown, but there is a three-week gap between when the old viaduct closes and the new tunnel can open.  This isn’t a scheduling glitch; there are last minute construction tasks that can’t be completed until the viaduct is closed.

Locals are apprehensive about the upcoming traffic apocalypse, and as a visitor there are a couple things you should be aware of if you are visiting us in the month of January:

Currently, about 90,000 car trips a day go over the Viaduct. Many of those cars will migrate to I-5.  That means that the already dreadful I-5 headache will start earlier, end later, and be even slower.   Be aware of this if you are driving into Seattle or renting a car at the airport and try to plan your arrival before or after rush hour.

Public transportation will not save you here.  Busing or riding light rail WILL help by keeping yet another car off the roadway, but still be aware that buses and trains will be extra full, and in the case of buses, you will be stuck on the same roads as everyone else, so allow extra time.

Metro (Seattle’s bus system) is adding buses during the closure, and a second water taxi (so exploring Alki will be easier than ever, as a surprising benefit).

The great thing about staying with Seattle Oasis Vacation Rentals is that once you are here you won’t have to deal with any of these traffic issues! Staying in one of our Belltown locations will guarantee you close access to all of the famous Seattle sights. Leave your car in our free parking spot and walk or bike to shopping, restaurants, the Seattle Center, Pike Place Market and more.