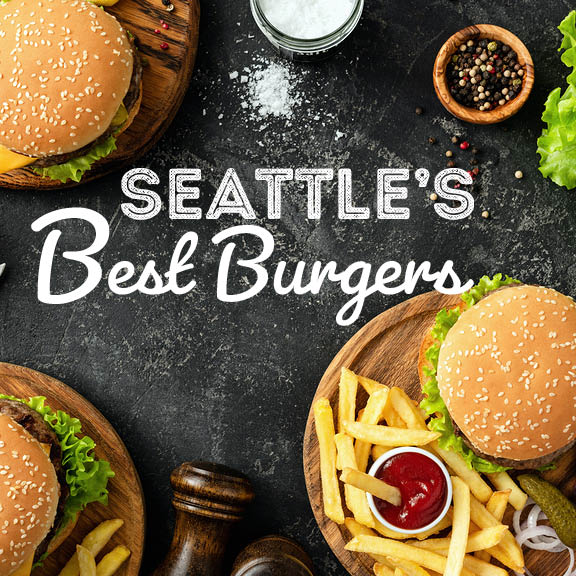 Seattle is a foodie town, and from seafood to vegan, and pho to empanadas, there is something for everyone. However, one of the world’s most perfect foods is the humble hamburger, and a perfect cheeseburger may actually be the perfect meal. If you agree, Seattle has some great burgers to choose from—here are my personal top choices!

Local 360: Local 360 places an emphasis on local sourcing of food, with the majority of what they serve produced within a 360-mile radius of Seattle. This tasty version of a burger is on a classic bun and won the Best All American Burger category in Seattle Met’s Best Burger issue with a specially seasoned blend of locally produced ground beef that is cooked to order and can come with their awesome skin-on thick cut fries. Standard burger fixing’s here include mixed greens, bread and butter pickles (made here) and aioli. 2234 First Avenue (corner of First and Bell)

Dick’s Drive-In: Seattle natives coming home often make their local Dick’s the first stop off the plane. This is Seattle’s version of In and Out, or White Castle, or Milo’s, or Culver’s…well, you get the picture. This is a fast food burger at it’s most basic and approachable—all but one of the restaurants are drive-up only, no special orders, limited menu. What you get is the same burger that was sold in the 1950s. with never frozen meat, local buns, and cut-on-the-premises French fries. It’s Seattle comfort food at its most elemental, and I admit that some of its appeal may be wrapped up in the community group-think of it being OUR burger place. And that’s okay, and why when I travel I love hitting the local “spots” that define a region. For those of you who embrace that mindset, Dick’s is the place for you! Most of us locals have no memory of NOT having Dick’s in our lives. The phrase “deluxe, fries, chocolate shake” is music to my ears, and it’s the order I would recommend to newbs. Closest Location is 500 Queen Anne Avenue N., near Key Arena.

Lil’ Woody’s: This burger joint is a relatively new, but completely on-point, addition to Seattle’s stable of great burger places. I’ve heard by both food professionals and friends alike that the Lil’ Woody burger is what a McDonald’s cheeseburger would taste like, if it were real. I would heartily disagree, as this is 1000 times better, but that certainly should pique your curiosity! My fave here is the Trotter, with grass-fed burger, caramelized onions, bacon, apple and horseradish sauce. A little bit of heaven, for sure. Another crowd favorite is the Fig and Pig, with that same grass-fed beef, pickled figs, blue cheese and bacon. A word to the wise—this isn’t the place to wear white. Anything white. The Lil’ Woody’s signature, in my opinion is the saucy messiness of their offerings.